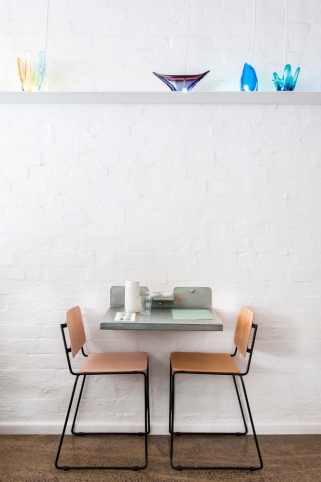 These boys have been busy. Two years after opening the successful Merchants Guild in East Bentleigh, Conti and Minichilli were itching to spread their wings. Securing a space in Armadale’s Morey street – just off High street – Walk Don’t Run epitomises Conti and Minichilli’s slogan: mindful eating.  “We want people to come in, sit down and have a really nutritious meal,” explains Conti.

The meals are light and fresh with super foods incorporated into every dish. All the produce is organic and the juices are slow-pressed, containing both fresh vegetables and fruits. Example dishes include house made life loaf with blueberry/raspberry raw chia jams and whipped ricotta; superfood breakfast with kale, broccoli, spiced pumpkin, green chilli and pepitas with light cottage cheese and free-range eggs and green tea soba noodles with poached chicken and tahini dressing.

The chef and co-owner Ryo Doyama’s Japanese heritage is responsible for the Asian-fusion influences.”His flavours are great and he’s got beautiful technique,” states Conti.

“Our meals will satisfy you without feeling like you need to have a sleep,” he adds.

The “mindful eating” slogan continues to manifest in the French-pressed filtered coffee. The single-origin beans extract the natural sweetness of the blend, making it easier for patrons to hold back on sugar additives and milk. “It’s also a slower release of caffeine so it’s not a massive espresso hit — much better for the nervous system,” explains Conti.

“We’ve had a pretty good reaction to it; some people have been willing to have a go and then come back for it,” he adds.

A hiatus overseas – which involved travelling to five continents and 40 odd countries in four years – exposed Conti to different organic produce, flavours and culinary techniques. It was this, coupled with his father’s cancer battle, that pushed him into the study of wholefoods.

“When my Dad was sick with cancer I started looking into alkaline methodology and how to heal with foods. Foods that are grown organically are put here for a reason; they’re going to heal us. If you pay attention to how they should be prepared they’re going to benefit you,” Conti explains.

Although operating an espresso machine Merchants Guild runs alongside the new cafe’s super food agenda. The popular East Bentleigh cafe was received well due to the absence of trendy, niche cafes in the area. Operating since 2013 Merchants Guild grows its own herbs and is one of many distributors of Conti and Minichilli’s Prana Chai. “The production of Prana Chai started about 11 years ago in my mum’s kitchen. I came up with the recipe through research of various spices. There are seven spices contained. We did a bit of trial and error; started selling it to customers. One of our customers wanted to buy it one day, which got me wanting to approach other cafes with it,” Conti enthuses.

“Now it’s worldwide. It’s distributed all around the world — we’ve got six reps in America; we’ve got a Director in Germany. The Prana is spreading.”